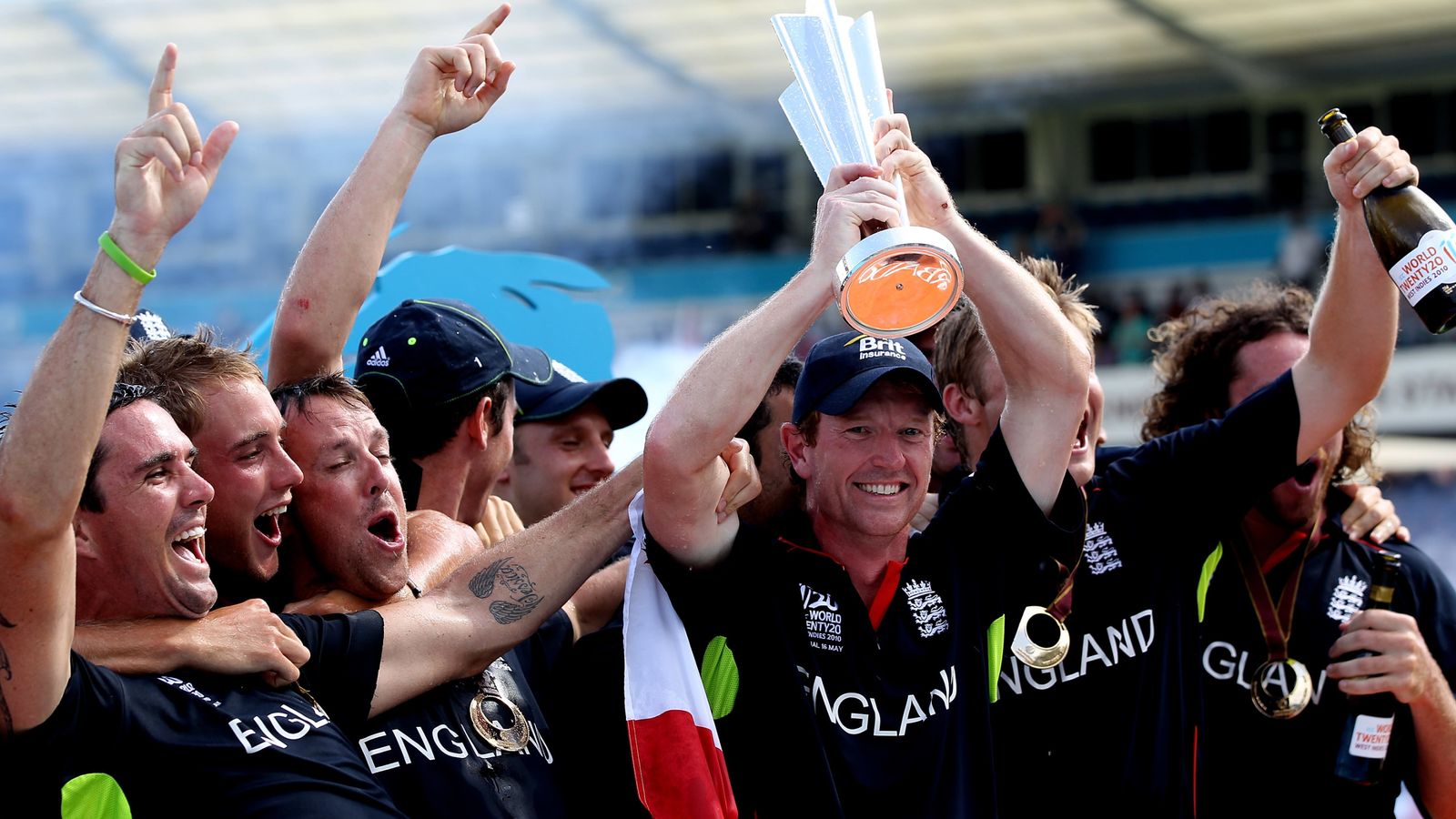 It is 10 years since England won their first, and so far only, T20 World Cup title.

Our guests shared their memories and insights as England coasted to their target of 148 against Australia with three overs and seven wickets to spare – Collingwood hitting the winning run to spark jubilant celebrations.

Below is what Colly and co made of England’s triumph, openers Craig Kieswetter and Michael Lumb being picked off the back of smashing the senior side playing for the Lions ahead of the tournament, Broad and the attack’s canny bowling, KP firing with the bat and sipping champagne..

KEVIN PIETERSEN was named Player of the Tournament after scoring 248 runs in six games – including 47 from 31 balls in the final – and says even though he does not remember much about the event, he knew he was in quite the “purple patch”…

“It was a roller-coaster. I was so entwined with what was happening back in London (with the birth of my child) and not thinking too much about cricket, if I’m honest. I can’t remember anything about the tournament as such because I was completely attached to what was happening at home, that was the bigger picture.

“The only reason I was calm (in the final) was because 140-odd is not a big score to chase in T20 cricket, not a score we should be worried about – even 170 was gettable on a good wicket. Australia kept coming at us, they didn’t have anyone who took pace off the ball, bowled cutters, wicket-to-wicket, like a Paul Collingwood. Their pace played into our hands a hell of a lot.

“I was in a little purple patch and everything just felt good as I walked out to the wicket. I got into the zone. You think of the pace Shaun Tait, Dirk Nannes and Mitchell Johnson were bowling (in the final) but everything felt like slow motion. You feel like you can hit anything. You are playing the shot before the bowler has delivered the ball. It’s quite a surreal feeling.

England won with 18 deliveries to spare in a T20 final. They absolutely hammered them! I have seen them all, some of the greatest players play for England. Pietersen is the best I’ve seen and from a commentary point of view, he got you on the edge of your seat. Brilliant player.

“It’s not very often an England team completely annihilates the opposition. England teams are very good at making a catastrophe out of something that should be a walk in the park. So this was in stark contrast to a lot of big games I would have played in with England and watched them play.”

“We got better every game and as captain it was nice seeing the boys gain confidence and flourish. It was like a juggernaut, we were gaining momentum every game. We wanted to do things differently to how we had done them in the past and it was worth the gamble

“It was all about the mental side, making sure players were as confident as they could be. They weren’t going to be told off for trying to take a spinner down in the first over. We wanted players to have that backing and support, we allowed the players to play as men. I hate conservative cricket and don’t think you win big tournaments, World Cups being conservative.

They took our bowlers down – and we had a very good bowling attack. They had pure power. Kieswetter was one of the hardest hitters of a cricket ball in world cricket, not just in England. It was ‘we need to get these guys in, we need to take that chance’.

Paul Collingwood on the selections of Kieswetter and Lumb

“It turned out to be an easy win in the end and if you could bottle that feeling of hitting the winning runs, then I would pay a hell of a lot of money for it! I can’t describe the emotions. I didn’t know what to do.

“It was euphoria going through your body, almost like a sports drug taking you over. Pure freedom. You are just so happy for the team around you. You don’t win as individuals out there on the park, you win it as a team and that is the management included. We had our best game and were just fantastic. We felt unstoppable. I am getting goosebumps watching it now.

“We had to do a few formal things afterwards which was quite disappointing. Who wants to drink champagne when you have just won a World Cup? Get a beer in your hands with the lads. Champagne is too posh!

“I am a big believer that if you win a World Cup as a captain you deserve the right to defend it. Even though my form wasn’t great, with only eight games between this World Cup and the (2012 World T20), I was hoping I would be given the chance but unfortunately it wasn’t to be. I am still very proud of what I achieved with the team.”

Because we hadn’t got over the line before, being in this position was a bit of a shock. I don’t think any of us would have truly envisaged it before the tournament. We came out of the group stage on run rate but found momentum and that belief grew very quickly. Our bowling was the cornerstone but with the mindset Colly pretty much solely created, we played with a lot of freedom and that was the key to the tournament.

STUART BROAD felt the nerves in the final but was always pretty confident England’s balanced side, including star man KP and Player of the Match in the final Craig Kieswetter, would get the job done with the side having grown throughout the tournament…

“I remember when Colly asked me to bowl, my legs went like jelly! I was so worried. It was the biggest game of my life at this point. We were so dominant for 12 overs and I thought we had a more balanced team and attack than the Aussies. I think we ‘out-tacticed’ them a little bit. However, they probably owned the final eight overs, so momentum was with them.

“Throughout the tournament we weren’t really worried who we played, we just did our thing. Everyone was on top of the world, everyone played a role in a win, there was role clarity, so there was huge belief. Pietersen gave the whole team massive belief as he was arguably in the form of his life. He played some outrageous shots against the opposition’s best bowlers.

“When your best player is taking down their best bowlers, it gives your guys down the order the belief they can do this as well. KP and Kieswetter in this final just built a partnership that meant the game never got away from us. Kieswetter was an amazing ball striker but also hit it in weird places. He was really under-rated and the way he came on the stage here was awesome.”

GRAEME SWANN could barely watch the run chase, while he was also thankful for a key dropped catch by Ryan Sidebottom ahead of the tournament and to England’s seamers during it…

“Being very superstitious, the first five overs I was in the changing room talking to Jimmy (Anderson), nervously not wanting to watch the start. It was going so well that me and Jimmy sat for the most part out the back in Barbados where you can’t even see the field. There was a little screen up and we dare not watch it until there was a boundary, which was about twice an over as our South Africans at the top smashed it everywhere.

“I remember when Kieswetter had about 15 (in the inter-squad game before the World Cup) and skied one to mid-off, where Sidebottom dropped it. He went on to get 60 or 70, they beat us and he and Lumb got picked. Without that, I don’t think Andy Flower would have had his head turned by Kieswetter or Lumb. Sidebottom won this World Cup on his own by dropping Kieswetter!

As a bowling unit they were phenomenal. No side got 150 against them. You had Broad, Sidebottom and Bresnan and then the two spinners. Swann with all his flight, guile, drift and dip and Yardy darting it in. There were unsung heroes – Luke Wright, Bresnan, Sidebottom, even Bopara, who only played one game. This was a proper white-ball side. They were the best team in the tournament and had the best player in Pietersen.

“I remember Broady, Bresnan and Sidebottom coming up with slower ball bouncers and wide yorkers. These seem like the absolute norm but they were the first bowlers I’d ever seen sit down and say ‘we are going to use these’. It was a deliberate plan, deliberate fields.”